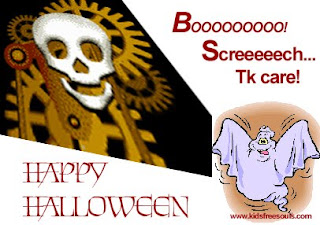 Happy Dev Diwali! From today, Gods will celebrate Diwali for five days. However, 31st October being Halloween Day, its haunting of ghosts and werewolves and vampires like kali chaudas.

Mystyfying myths remain mysterious even though ultimate truths could be discovered using the human mind alone. Science has yet to reveal what caused them. Satanism, Blackmagic, tell tale, mythology and all, lead to beliefs of evil omens to exist on earth as Ghosts or demons or witches. It takes a fraction of a second to hear the sound ‘AUM’ at such times of spirit scare and take a walk outside the mind, moving from head to heart. We are all hung up in the head. One solution is get down from the head to the heart. Mysteries remain but problems disappear and evaporate leaving the trails of mysteries behind.
Happy Halloween's Day and Happy Dev Diwali too.
Btw, heard the track of Steven Cravis - Happy Halloween Music? It's a part of the 75 Top Halloween Songs picked by Apple iTunes iMix and the individual song is available as a download there, under the special iMix tab called Complete Set. You can also find the track for download on Mac and PC here http://www.cdbaby.com/cd/happyhalloween/from/topcds or just log to http://www.happyhalloweenmusic.com/ or listen at AmazonMP3.com (France, Germany UK and USA only, I believe) - Enjoy!
- ilaxi patel
Editor, http://www.kidsfreesouls.com/
Newspaper for Kids
Posted by ilaxi patel at 9:55 AM No comments: 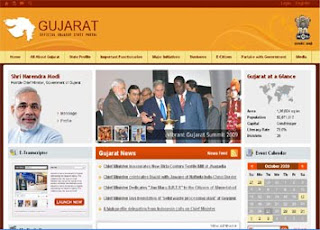 As I content wrote the Gujarat Government State Portal for last many days, here's presenting the newly revamped Official Gujarat Portal. The thematic Portal provides glimpse into 5.5 Crore Gujaratis ‘Apnu Gujarat – Agavu Gujarat’ (Our Gujarat, Unique Gujarat) and act as catalyst to positively influence Gujarat and its rich Culture and traditions which has marked its footprints Internationally. The Legacy of Mahatma Gandhi lives on to the boom of a 21st century Gujarat with robust and mass movement of Development and Progress with a Proactive Government.
- Explore Gujaratindia.com till I still Explore....
A result of Perfect Team Work! Watch this space as I blog more on this...
- ilaxi patel
Editor, www.kidsfreesouls.com
Newspaper for Kids
Web Content Analyst : www.gujaratindia.com
Author of Guardian of Angels
Posted by ilaxi patel at 1:25 AM No comments:

May this festival of lights illuminate your life with good health, long life, peace, happiness and prosperity. Wishing all who pass this way, very Happy Diwali and may your dreams turn true...
Well, invoked Lakshmi? I just did! Only for a day, she descends on the Earth to give her blessings I hear. Read more on Diwali on Kids Diwali pages here.
- ilaxi
Posted by ilaxi patel at 5:54 AM 1 comment:


Alfred Nobel was born in Stockholm on October 21, 1833 who became a famous scientist, inventor, businessman and founder of the Nobel Prizes. Alfred died in San Remo, Italy on December 10, 1896. In his last will and testament, he wrote that much of his fortune was to be used to give prizes to those who have done their best for humanity in the field of physics, chemistry, physiology or medicine, literature and peace. It took four years for his executors to convince all parties to follow Alfred's wishes.
That's how Nobel Prizes came to exist since 1901 when first Nobel Prizes were given in Stockholm, Sweden.
However, it is interesting to note How the Peace Prize was included by Alfred Nobel in his will.

Alfred had no family of his own. Once, he announced in the newspapers for a secretary. An Austrian lady, Bertha Kinsky von Chinic und Tettau got the job. After working for a short time, she moved back to Austria to marry Count Arthur von Suttner.

Alfred and Bertha von Suttner remained friends and exchanged letters through the years. She later became very active in the peace movement. She wrote the famous book "Lay Down Your Arms." When Alfred Nobel later wrote his will to establish the Nobel Prizes, he included a prize for persons or organizations who promoted peace.

As there is mix surprize and opinions, headlines keep changing on Google 'Call to Action', 'A prize that carries perils', 'wins mocks awards' - Cool reactions to Obama's Nobel Prize for Peace!

Posted by ilaxi patel at 5:58 AM No comments:

Bloggers unite on the Web for a social event writing for cause - Climate Change.

Ideas to Blog by Blog Action:

Earlier, Kidsfreesouls mentioned of Earth Hour. You can still put yourself on the Vote Earth map and upload your photos, pictures and weblinks to show the world future you want to see. Teachers can help Kids to Make Lanterns and cast their vote and send to Copenhagen.

Click to find Gujarat's Initiatives for Environment concerns as it is first in Asia and fourth in the World to set up 'Climate Change Department.'

Surf Kidsfreesouls Environment pages and every week, we are placing two questions related to Environment in association to Earth Talk EMagazine inEnglish and Spanish.

Well, you can find the latest and most popular climate change actions online at globalwarming.change.org. If you are a blogger and concerned, Unite Bloggers and blog post on topics related to Climate Change. If you are a teacher and would like to spread awareness, click to Kidsfreesouls Resources for links to Environment sites for kids and let this be a 'Joy of Learning' class.

Here is a brief Product Description of Amazon:

'Lock Cromwell in a deep dungeon in the morning,' says Thomas More, 'and when you come back that night he'll be sitting on a plush cushion eating larks' tongues, and all the gaolers will owe him money.' England, the 1520s. Henry VIII is on the throne, but has no heir. Cardinal Wolsey is his chief advisor, charged with securing the divorce the pope refuses to grant. Into this atmosphere of distrust and need comes Thomas Cromwell, first as Wolsey's clerk, and later his successor. Cromwell is a wholly original man: the son of a brutal blacksmith, a political genius, a briber, a charmer, a bully, a man with a delicate and deadly expertise in manipulating people and events. Ruthless in pursuit of his own interests, he is as ambitious in his wider politics as he is for himself. His reforming agenda is carried out in the grip of a self-interested parliament and a king who fluctuates between romantic passions and murderous rages.

From one of our finest living writers, Wolf Hall is that very rare thing: a truly great English novel, one that explores the intersection of individual psychology and wider politics. With a vast array of characters, and richly overflowing with incident, it peels back history to show us Tudor England as a half-made society, moulding itself with great passion and suffering and courage.

You can find Wendy Smith's review of the book here on Washington Post and Christopher Tayler's review on Guardian, as I have not read nor got a copy of the book.

Well, the book I understand, calls for a broad readership. It reached the libraries and the book shops even before it got into the long list of Man Booker Prize. It is expected that classrooms might add this book for reading.

Train to Pakistan is the story of this isolated village that is plunged into the abyss of religious hate. It is also the story of a Sikh boy and a Muslim girl whose love endured and transcends the ravages of war. A timeless narrative by Khushwant Singh. A documentary of Punjab, its people and culture.

Well, aren't our children overburdened with too much of knowing History?

Posted by ilaxi patel at 1:25 AM No comments:

The Man Booker Prize for Fiction 2009 was short listed and announced earlier in September. Six books were again short listed for the Final Prize winner. 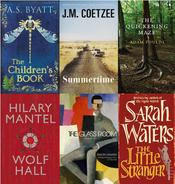 These Fiction books are selected by the Judges as they are found to be narrative, great inventiveness, poetry and sharp human insight in abundance.

The winner of the 2009 Man Booker Prize for Fiction will be revealed on Tuesday 6 October 2009 (today) at a dinner at London's Guildhall and will be broadcast on BBC News across television, radio and online.

The winning author will receive £50,000 and can look forward to greatly increased sales and worldwide recognition. Each of the six shortlisted authors, including the winner, receives £2,500 and a designer bound edition of their own book.

The Man Booker Prize for Fiction 2008 winner was 'The White Tiger by Aravind Adiga' who won the 2008 prize. You can read the full news story here.

I feel, writing do not come so easy for children as writing fiction is an exercise of power of narration with plots and a good storyline. Children Fiction writing comes with dedication and children's book market can be difficult to crack for first time authors. It needs brainstorming sessions to plot the story line with rhyme and reason. Humor to combine and polish writing and editing skills.

Well, If you are planning to write a book, first decide. If you wish to go for a profession, probably you got to know the tricks of the trade. You can peep into my Amazon Book Book Page on Kidsfreesouls and look forward to read on 'How to become an Author and publish your own book' - Enjoy.

Btw, here is A S Byatt's Interview on 'The impact of writing on Families' and you may look for the Winner Announcement soon on this site. Countdown begins.

Posted by ilaxi patel at 1:16 AM No comments: 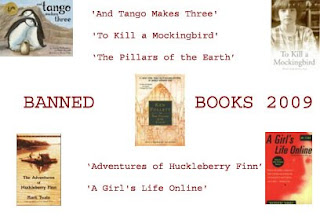 Posted by ilaxi patel at 3:58 AM No comments: 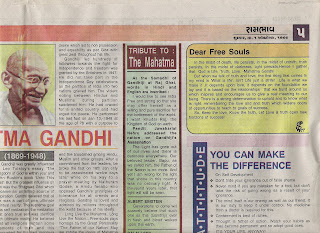 The Gandhi Ashram in Ahmedabad is a witness to many important historical events and is a national heritage. Sabarmati Ashram was home to Mohandas where he worked and practiced his principles for more than 18 years. It remained a major hub of political activities for the country. The Satyagraha Ashram carried a mission to create a non violent group of freedom fighters who helped in the freedom fight of the country. The Gandhian followers led a path of truth and non violence under Mahatma Gandhi's guidance. One of the important events was the Dandi Yatra -

Kidsfreesouls salute the great leader and highly believe in the Gandhi Principles. You can find the profile of Gandhiji here alongwith the Constructive plans and a Quiz on My Experiments with the Truth from my print media (Freesouls in Sambhaav newspapers) competition taken earlier.

Btw, October Calendar and Projects for October in classrooms appear on Kidsfreesouls.com.

Posted by ilaxi patel at 9:38 AM No comments:

Guardian of Angels: A practical guide to Joyful Parenting by Ilaxi Patel