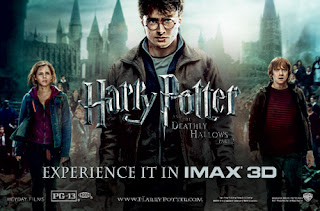 Banned Books and a lot is said about Harry Potter! HP books promotes witch craft as mentioned them to be inappropriate for Catholic schools.

These books were to ban out of the school libraries, based on a claim they promote witchcraft. The themes of witchcraft and sorcery were inappropriate for a Catholic school. A county school board members said the books were good tools to encourage children to read and to spark creativity and imagination.

I think the movie sadly fails to impress! The final chapter begins as Harry, Ron, and Hermione continue their quest of finding and destroying the Dark Lord's three remaining Horcruxes, the magical items responsible for his immortality. But as the mystical Deathly Hallows are uncovered, and Voldemort finds out about their mission, the biggest battle begins and life as they know it will never be the same again.

You can read the synopsis here and maybe you like the thickening plot. Too much complicated and I think, far beyond to enjoy a theme like this by kids in India when most of the children hardly have formed the habit of reading and just hooked to watching hindi movies and cartoon channels. Maybe some exceptions, can't say but sure, they would be exceptional kids.

If you know kids who've watched the movie at Science City, do get them to write the reviews and submit to Kidsfreesouls.com -I shall be pleased to put it on site for other kids to read. Btw, find Harry Potter stamps online. Enjoy.

Newspaper for Kids
Posted by ilaxi patel at 7:42 AM No comments:

Guardian of Angels: A practical guide to Joyful Parenting by Ilaxi Patel